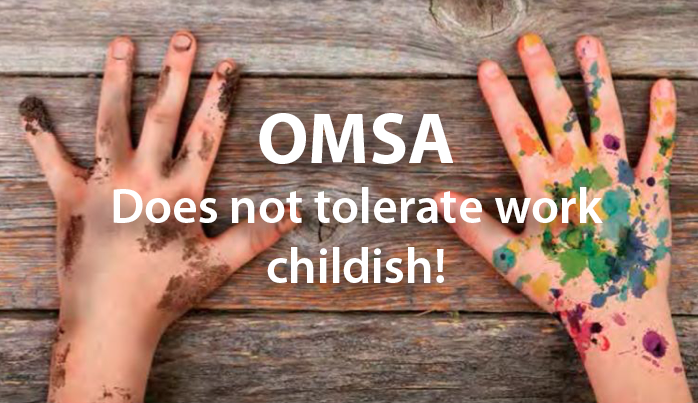 If you want to know our Internal Policies, we ask you to send an email to: omsa@omsabo.com

OMSA is a smelter in Bolivia, a country cloistered in the heart of South America.

The smelter is strategically located in the Bolivian Tin Belt near the city of Oruro where tin concentrate has been produced for the last 400 years. Bolivia has enormous reserves of tin both proven and probable to be produced throughout this century.

All the concentrate used by OMSA comes from Bolivian mines with the special mineralization characteristics typical of this part of the world. We have precise knowledge of the region and of the specific mines for each type of concentrate, because Bolivian standards require the supervision and registration of all the concentrate. Also, we have to present those records before we can export the metal ingots.

During the year 2018, OMSA has been in the process of adopting ISO 9001; 19001; and 45001 and will be certified during the year 2019. In this way we will be covering the three areas of the management system in the administrative, production and comercial areas.

We must also remember that the ILO Convention 182 shows the need to adopt new instruments for the prohibition and elimination of the worst forms of child labor, the main priority of national and international action, including international cooperation and assistance, such as supplement to the Convention and Recommendation on the minimum age for admission to employment, 1973, which remain fundamental instruments on child labor. For this reason, we are also very careful to inform and validate that our supply chain is well informed about it.

OMSA is a member of the ITA organization and through them we are fully informed about the different international policies of many countries, institutions and organizations. In this way, we seek to be informed and await regulations both past, current or new. In 2019 we began to report through the Code of Conduct that this body is implementing.

Section 1502 of the "Dodd-Frank" Act of Financial Reform and Consumer Protection of the United States that was promulgated by President Obama on July 21, 2010 states that:

SECTION 1502. CONFLICTING MINERALS (a) CONGRESS SENSATION REGARDING THE EXPLOITATION AND TRADE OF CONFLICT MINERALS COMING FROM THE DEMOCRATIC REPUBLIC OF CONGO.-Congress feels that the exploitation and trade of conflicting minerals that come from the Democratic Republic of the Congo are helping to finance conflicts characterized by extreme levels of violence in the eastern Democratic Republic of the Congo, especially sexual and gender-based violence, and that this situation is contributing to a humanitarian emergency, which is why which justifies the application of the provisions of section 13 (p) of the Securities and Exchange Act of 1934, supplemented by the provisions of sub-section (b).

(b) DISCLOSURE RELATED TO CONFLICT MINERALS ARISING FROM THE DEMOCRATIC REPUBLIC OF CONGO.-Section 13 of the Securities and Exchange Act of 1934 (15 USC 78m), with the amendments provided for in this Act, is amended by adding the next new sub section at the end: '' (P) DISCLOSURES RELATED TO CONFLICT MINERALS THAT COME FROM THE DEMOCRATIC REPUBLIC OF CONGO.- '' (1) REGULATIONS.- ''

(A) IN GENERAL.- No later than 270 days after the enactment of this sub-section, the Commission shall promulgate regulations to require that any person described in paragraph (2) disclose in a manner annual, beginning with the first full fiscal year of the person beginning after the date of enactment of those regulations, if the conflicting minerals are necessary in accordance with that described in paragraph (2) (B), in the year for which such a report is required, came from the Democratic Republic of the Congo or an adjoining country and, in cases where those conflicting minerals actually came from any of those countries, submit to the Commission a report that includes, in period covered by the report-'' (i) a description of the measures taken by the person to exercise due diligence as to the source and chain of custody of those minerals and those measures shall include an independent audit of the private sector of that report submitted to the Commission that is performed in accordance with the standards stipulated by the Comptroller General of the United States, in accordance with the rules promulgated by the Commission, in consultation with the Secretary of State; and '' (ii) a description of products manufactured or contracted to be manufactured that are not free of conflict DRC ('conflict-free DRC' means products that do not contain minerals that directly or indirectly finance or benefit armed groups in the Democratic Republic of the Congo or an adjoining country), the entity that conducted the independent audit of the private sector in accordance with clause (i), the facilities used to process the conflict minerals, the country of origin of the conflicting minerals, and the efforts to determine the mine or the place of origin in the most specific way possible.

''(B) CERTIFICATION.-The person who submits a report under subparagraph (A) shall certify the audit described in clause (i) of that subparagraph included in that report. This certified audit will constitute a critical component of due diligence in establishing the source and chain of custody of those minerals.

OMSA has been audited by the EICC for the last five years with the CFSI program, declaring that we are a conflict-free smelter during all these years. Recently the changes of this organization by the RBA allowed OMSA to become a member of RBA. We also plan to continue with the RBA audits under the RMI program.

The OECD establishes in the Guide for the supply chain of minerals in conflict and high risk areas, second edition, annex II:

Regarding the serious abuses associated with the extraction, transport or commercialization of minerals:

1. While we supply or operate in areas affected by conflicts and high risk, we will not tolerate or in any way benefit, contribute, assist or facilitate the commission by any of the parties:

1. i) any form of torture, cruel, inhuman and degrading treatment; 2. (ii) any form of forced or compulsory labor, which means work or service that is required of any person under the threat of punishment and for which said person has not volunteered; 3. iii) the worst forms of child labor; two 4. iv) other serious violations of human rights and abuses, such as widespread sexual violence; 5. v) war crimes or other serious violations of international humanitarian law, crimes against humanity or genocide.

In view of the delicate situation indicated in this Law; and considering the OECD due diligence directives as an international standard recognized during the discussion of the SEC standard (Securities and Exchange Commission); In compliance with the ITA COC, OMSA has made all documents available for review by authorized and reliable auditors in the framework of due diligence and to determine that no part of our concentrate comes from the DRC and its adjacent countries.

OMSA is committed to complying with the Dodd Frank Act, Annex II of the OECD directives and SEC regulations as well as the ITA Code of Conduct, as well as any other law that aims to prevent violations of rights. humans. In addition, our own ISO management system will allow us to monitor our continuous improvements.

Taking into account the aforementioned, we declare that all our concentrate are of validated origin, which we can demonstrate to any authority that may require this information, we work responsibly, attending to the needs of our workers, suppliers and final customers and we care about our environment, both environmentally and socially.

Within our Commercial Policies for the Purchase of Tin Concentrate, it is explicitly to prevent exploitation and child labor..

The OECD (Organization for Economic Cooperation and Development) in one of its main objectives condemns violations of Human Rights in the commercialization and extraction of minerals that include:

Our work is carried out in strict compliance with Bolivian Law Number 548 of the Code for Girls, Boys and Adolescents.

Our work is carried out in strict compliance with Bolivian Law Number 548 of the Code for Girls, Boys and Adolescents.

For this reason Operaciones Metalúrgicas S.A. can not and will not buy Tin Concentrates from suppliers that include child labor within their mining activities!

ILO Convention 182 shows the need to adopt new instruments for the prohibition and elimination of the worst forms of child labor, the main priority of national and international action, including international cooperation and assistance, as a complement to the Convention and the Minimum Age for Admission to Employment Recommendation, 1973, which remain fundamental instruments on child labor.

The Plurinational State of Bolivia, within its national legislation, also adopted child labor protection laws both in its General Labor Law Article 52, as well as in a special law for the protection of children, adolescents, article 126 (Right to Protection of work), article 127 (Activities in the Family framework), Article 128 (community and family activities).

For all this, Operaciones Metalúrgicas S.A. aware of the importance of freeing children from all forms of work in compliance with international conventions and national laws adopts a Human Resources contracting protocol requiring a minimum age of entry to work of 18 years, for this he asks for his Identity Card as indispensable requirement to be able to perform in our company as an employee.

METALURGICAL OPERATIONS MEETS WITH ITS COMMITMENT TO NOT TOLERATE CHILD LABOR.

82 years later OMSA equipment and technology have been enhanced and modernized constantly and actually our production is exceeding today’s demanding levels of impurities for international markets. Nevertheless the rotary furnaces are still representing the heart of our operation.

OMSA is located east of the City of Oruro (3.730 m.a.s.l.), 3,5 Km. on the highway to Cochabamba, in the Huajara Industrial Park. The total gross area of the smelter installations extension is of 14 Hectares and developed surface of 10,000 m2.

Our main achievement is the production of premium tin metal (< 15 ppm Pb) from low grade concentrates (10 to 30% Sn content) or from highgrade concentrate ( 45% Sn and higher content), using for this intention its units of volatilization (Fuming Furnace) and reduction (Rotary Furnaces)

Due to stricter environmental laws passed on April of 1992 in Bolivia, OMSA was forced to leave the original site in the proximities of the city. For 6 months OMSA stopped production and rebuilt its plant in the current location. For almost two years until January 1994 only volatilization dusts were produced to maintain the cash flow and to complete the relocation. Year by year all environmental regulations have been implemented and currently new equipment is being installed to meet the legal levels of emissions and international regulations.

The quality control of metallic products is carried out in the laboratories of S. G. S. For the monitoring of our operations and the control of the tin contents and impurities in the raw material, we have our own chemical laboratory equipped with necessary analytical instruments. The purchase of concentrates is supervised and controlled by Alex Stewart Assayers.

The objective of the company, is to reach a capacity of 300 fine tonnes of metallic tin per month in one year without compromising the quality of its product, and even reduce current levels of impurities.

If you have questions, please send an email to the following contact form.

Your message has been sent. Thank you!